App-Kids: Making Music With Tablets In The Kindergarten

Mobile Music in the Making 2017 / Call for Papers

App-Kids: Making Music With Tablets In The Kindergarten

A friend of ours, who is a mother and teacher, recently asked us for advice concerning a suitable use of media for children. She said she did not want her two-year old child to use a smartphone too early in life. However, she became curious about apps when she saw videos on facebook and youtube where music was made with apps, just like with traditional instruments. Furthermore, she also found numerous music apps for children in the app store. Now she was faced with the dilemma of either buying a xylophone or a xylophone app for her child. This led us to bring more clarity on this topic.

This article is a translation of an article initially published in German: Krebs, Godau (2016): App-Kids. Musikmachen mit Tablets im Kindergarten, in: Kinderzeit 01/2016. 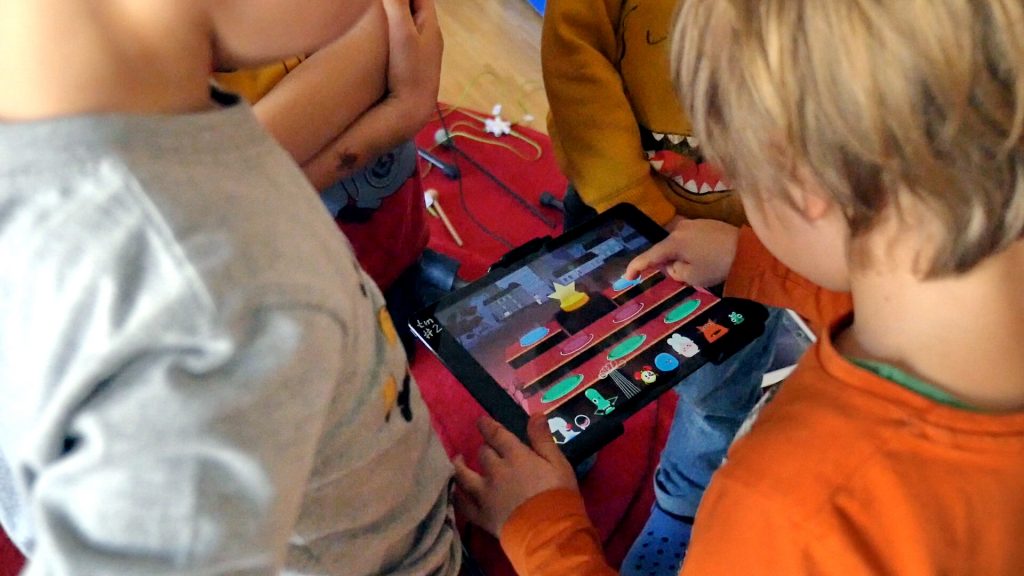 The descibed scene shows the uncertainties of most parents and educators regarding the issue of apps, music and education. Smartphone technologies are developing rapidly and are becoming a universal medium with endless application possibilities. The often heated debates about chances and risks of smartphones and tablets are mostly based on fundamental skepticism because we are still lacking research results which could answer educational questions.

Against the educational background we argue that xylophones made out of wood are suitable for the musical education of children, but tablets also have certain qualities which go beyond the virtual simulation of Orff- and other instruments. It is generally true that a plain transfer of the way of playing the instrument (e.g. xylophone) onto the tablet is unnecessary. Making music with the tablet becomes pedagogically valuable when certain needs can be answered and when projects can be initiated making things possible that were not possible before. In the following, we would like to explore the question of the educational potential of music apps, also with regard to their usage in kindergarten, and to look into some application scenarios.

For the last two years we have been working with Klax (1). In trainings, practice guidance and training sessions we designed, reflected and tested possibilities of media usage. Together with the committed teachers, we thought of ways to use smartphone technologies that can be educationally valuable and how this can enrich the daily life in early education. Apps are always in the focus of our work. They cannot just be used for listening (player apps), but also for learning music actively and experimenting creatively with sounds.

Why mobile digital devices and music apps for children between 2 and 6 (kindergarten)?

Critics claim making music with apps to be limited and preventing primary musical experiences like producing sounds with the body, the voice or everyday objects. This is based on the idea that lacking primary experiences would have negative effects on the construction of the world and identity of children because images of reality and oneself would be oriented on the pictures and music given by the media. Instead of learning about music via YouTube on the screen, children should experience it directly via musical practice.

Contrary to this idea, we would like to point out that TVs, MP3-players and apps are part of contemporary socialization of children. The media does not come into the world and changes it, media is just as well a part of the approach to the world and therefore of knowledge (2). These days it is important for children to make relevant experiences that open the doors for the digitalized society we live in. Learning how to use smartphones and tablets is just as well a primary experience in this context.

In the relation between childhood, media and pedagogy, two contradictory positions stand opposed to each other. While the first one focuses on media education through learning (“children need to learn how to handle the media”), the other one concentrates on existing media skills of children (“children have already been in contact with the media”) (3). One result of this confusion is a conservative standpoint by educators (parents, teachers in kindergarten and school) who want to protect the children of the dangers (e.g. consumer behavior or digital dementia) of the so called new media. But the thesis of children’s media competence is also assured by the often natural way children use the media and technologies in their everyday life, starting with the TV, to smartphone use up to the participation in online communities (e.g. YouTube channels by children).

In our opinion,  a demand for the advancement of children’s media competences rises from all the different standpoints mentioned above . In the worst case scenario children would grow up in an educationally protected space which encourages medial incompetence and social inequality. Such conservatively oriented educational approaches are jeopardizing our children! An educational shielding of the media and blind trust in the existing media competences of children tends to oversee the challenges the increasing complexity of the society is posing on its members. It would leave media education to chance.

More of the translation of this article, pictures and videos coming soon…

The main objectives of the Research Center for Mobile Music Making & App Music are exploration and systematization of forms of musical practices with apps, to further show connections to current trends in arts and music, and to identify artistic & social dimensions as well as implications for music education.