Award for mobile music making workshops »app2music«, as part of the »Research Center for Mobile Music Making« at the Berlin University of the Arts. 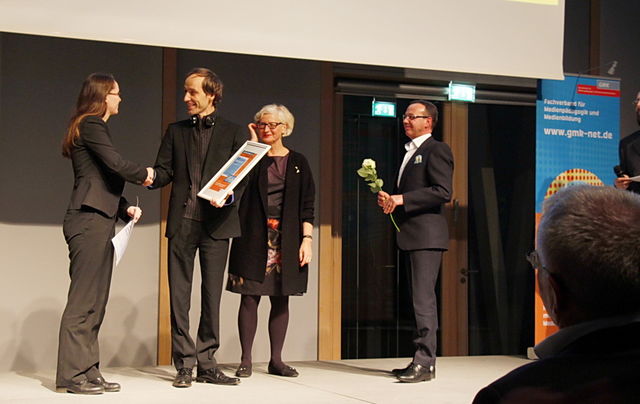 This year’s Dieter-Baacke-award in the category »Projects with Young Adults« was given to »app2music – Mobile Music Making Workshops at Berlin Schools«. The award was named after one of the most important german media pedagogue of the 20th century. Nationwide, the GMK (society for media literacy and communication culture) and the German Federal Ministry of Family Affairs, Senior Citizens, Women and Youth, award exemplary projects in the field of social and cultural work -> Link.

The mobile music making workshops, which are funded by the Berlin Project Fund for Cultural Education, are lead by Marc Godau and Matthias Krebs. Based on their experiences as professional musicians participating in the DigiEnsemble Berlin, music pedagogues and scientists, they have developed the idea for this project at the Berlin University of Arts (UdK Berlin). It is one of the first projects that is part of the newly found »Research Center for Mobile Music Making & App Music« (Forschungsstelle Appmusik) at UdK Berlin Career College. This research center, being one of its kind worldwide, is dedicated to the relatively young phenomenon of making music with apps. Pedagogic and aesthetic questions are in focus of the research. Furthermore, the research center understands itself as a platform for interdisciplinary cooperation between actors and institutions of science and practice.

The workshops of »app2music« were held at three different schools. The aim was to explore new forms of making music with devices used in every day life, such as smartphones and tablets, and use them creatively. Since spring 2014, students have met in workshop groups and learned how to use digital devices and apps as instruments. After half a year of experimenting around and hard practice, their work could eventually be showcased at school events. Children and young adults played contemporary pop songs, as well as own compositions on digital devices only – and surprised the audience with new sounds. The melodies, rhythms and grooves did not only convince other students, but also parents and teachers.

As a pilot project, »app2music« is connects practice and research in the field of digital media at school. The observations made during the workshops are collected, and transferred to »TOUCH:MUSIC«.

»Touch:Music« is a three year long research project in cooperation with the Bundesakademie für Kulturelle Bildung Wolfenbüttel and supported by the German Federal Ministry of Education and Research (BMBF). Just as »app2music«, the project »TOUCH:MUSIC« is part of the Research Center for Mobile Music Making. Its goal is to establish educational training for professional musicians from all kind of genres. After having finished the training, they are certified to hold music workshops with smartphones and tablets for young adults and children, as part of their cultural education. Preparations and research for this project are currently in the works. The first run of test trainings are estimated to take place in summer 2015.

The main objectives of the Research Center for Mobile Music Making & App Music are exploration and systematization of forms of musical practices with apps, to further show connections to current trends in arts and music, and to identify artistic & social dimensions as well as implications for music education.